i’ve been thinking about Religion 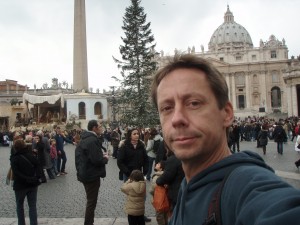 Stillthinking while loitering in the Vatican

Polite conversation does not move onto religious subjects. And for good reason. It is one of those areas where people simply cannot put aside their personal perspective and debate rationally. Big call? Hardly! Wars have (and are) fought over minute differences in theology, while political decisions are inevitably flavoured by views/preferences/prejudices that are either hegemonically or overtly sourced from morals based on that theology. At the local level the positioning of a church, mosque, synagogue or temple can lead to community tension, outcry and overt acts of violence. At a family level differences in religion can cause lifelong rifts, immense sadness and even lead to the complete breakdown of the family relationship.

So why am i thinking about religion?

For all of the reasons above. Frankly, i just don’t see it as being that important. The level at which people are prepared to raise their inpenetrable walls of ignorance is so low that it saddens me. If there is one area in which the human race has failed to advance it is surely in the area of theological understanding. What use is technology if it fails to help improve understanding of society by the individual, and the roles that the individual plays in shaping that society – or even more importantly, how society shapes that individual?

But i remain ever the optimist. Even if the One True Religion were to suddenly ascend to universal dominance and all mankind were to be suspended beneath its puppeteer strings things would be ok. The individual is still free in their mind to evolve their own take on the world as they see it. In such a world, Apathy would come to the rescue of the masses of the great unwashed, as even the universal acceptance of a single doctrine can only go so far to intrude into the average person’s world. We will all still want, need, love, hate, desire, envy, covet, admire, and laugh as we buy, sell, cajole, encourage, dominate, submit to, pander to, ignore, hurt, heal and generally do anything it takes to fulfill our own indeterminate objectives – all the while trying to make sense of it all.

In Australia there is a regular census – a counting of the population, where and how it lives and what its attitude to the world is. In it there are questions on religious outlook. Apparently this is for the provision of community services rather than to see how people think in a theological sense – an issue made all the more apparent following the movement to add “Jedi” as a religion following the 2001 Census. The Australian Bureau of Statistics (ABS) is a paragon of virtue in the enlightenment stakes, doing a fine job of collating and reporting on the various groupings under the category of ‘religion’. As just one example, following interpretation of the 2001 Census data, Zaroastrianism was moved further down the hierarchy of importance and added to the Miscellaneous Religion segment ‘Narrow Group 699’. The review also identified Jainism and Ethiopian Orthodox as having significant presence in the community and so these were lifted up the scale. Good on the ABS for lifting Theism up a peg as well. Great to see some of the supplemental codes reflecting those smaller components of the community – ‘2000 – Jesus Freak’; ‘0003 Lesbian Feminist’; ‘6139 Inca Sun Worshipper’; ‘7010 Nihilist’; ‘7010 Anti Religion’ and many others. My personal favourite is 7010 Anarchist. Yay Anarchy! Sadly, i cannot seem to identify any reference to ‘Jedi Knight’. It seems that the fair-minded ABS will go only so far to accommodate the Australian larakin ethos (corrected as “larrakin” in a few dictionaries but what do they know?).

It’s a bit of a pity that we can’t easily realign those questions to more correctly reflect the actual religious thoughts of the populace. For example, there are many people who consider themselves Christian yet they do not follow the Bible, and have most likely never read it. Are these people really confusing nomenclature? Are they really Agnostics who believe in a Supreme Deity but are relatively open about the characteristics of that deity? My own thoughts are that the bulk of the population who would note themselves as Christian are really Agnostics. Again, this is simply an opinion and a relatively uninformed one at that. It is based on my own experiences (which are naturally incredibly narrow), research and ponderings. Here is an example of what i mean. Find someone who believes in angels. Start to ask questions about these beings. Where do they live? How many are there? Why do they exist? Why does a perfect God require helpers? The more you question, the more the discussion cascades back to the “i simply believe” catch-all safety net. When the comment is made that most people believe in a God they are usually trying to bring ‘most people’ onto their team, to identify people with their version of whatever God may be.  If you begin to poke and prod the textbooks underlying the major religions, you begin to see that most people don’t really follow those text books at all. They are simply used as reference points which show that someone else has had a lot of deep thoughts and that means we don’t have to. When it is possible to track the developments and changes in religions, and point to borrowing of previous traditions, thoughts and concepts, the relevance of those textbooks becomes lessened. Perhaps that is why so few people are interested in pursuing such efforts? Who wants to have the basic building blocks of their faith undermined? And so my idea would be to have questions in the Census that attempt to identify those people who believe in a Supreme Being and identify those who take their beliefs only that far. In other words, clarify the actual attachment to specific belief textbooks.

Logically that would simply never happen. Even in a secular country such as Australia this would be seen as unacceptable by the major religions as it would potentially reduce the authority and leverage of those who administer the relevant textbook interpretation.

But what if it did? What if it was realised that the vast bulk of the population are inherently spiritual in one way or another but relatively apathetic towards the specifics of any particular religion? You could argue that this is already the case, as only a fraction of the community who profess a religious outlook actually attend regular church activities. However, i would argue that this interpretation simply allows the continuation of false assumptions and the interpolation of a huge chunk of the population into a grouping to which they really don’t belong. Call it hegemonic influence or what you will – it is arguably an assumptive influence that the community could do without. Who knows? Perhaps clearer thinking would actually drive more people to the formal religious processes?

An argument that is often raised against Atheists is that they rail against religion so much that they are making atheism a religion itself – a form of ‘anti-religion’. That could be argued but the inference would be at best misleading and at worst, simply false. The reason that many atheists are ‘anti’ religion is the pervasiveness of religious thought, and the difficulty of removing its influence from your life – even in a secular society.

Think i’ll leave it there for the moment. It’s a fairly big topic, so there’s no rush to cover all of the points…

2 comments for “i’ve been thinking about Religion”