Lack of faith. No belief. An inability to accept an unsupported premise as an adequate supposition for a concluded belief. The absence of the “leap of faith” so essential to embarking on the journey of acceptance and opening of oneself to the rapture possible through the munificence of a greater being.

Why is this important? It’s important because those who ask questions of belief are doing so from a completely subjective viewpoint, and more often than not are dismissive or even oblivious of their own basis of belief. However…

Is atheism a lack of faith?

Still thinking about… religion. At least, the absence of an adherence to a religious belief.

“I believe in flight because it is a practical reality. It is a set of actions and reactions based on elementary physics, and its validity can be independently tested by anyone possessing appropriate knowledge and equipment.” Some atheists approach the issue of religion by taking this approach, and asking why they should accept a belief system by using a lower benchmark of proof than they would apply to any other topic?

But is this a valid approach? At what stage do the practical realities of limitations to knowledge step in to force belief as a replacement  for understanding and personal experience? “Not possible – i can get through life without belief!” i hear you retort. “100% likelihood of occurring” is my rather arrogant answer.

The example of flight is one based on a mass of factors, which few people will bother to become proficient in just because they want to be absolutely certain of the validity of flight. Some people will be happy to fold a piece of paper, throw it and accept the wonder of flight. Others may question the process, and gain knowledge of wing shapes, surface area ratios, air pressure and airflow variances. They will most likely be quite clever and cunning in their design of even a folded paper aeroplane. They will be able to point to a substantial personal knowledge base of theory and application to underpin their certainty that they understand flight. There is no belief system required. And yet there is. How many people have taken the time to test the basics of flight in the negative? To show that the forces of air pressure are absent in a vacuum? If they haven’t, aren’t there levels of belief that are required in order to persist with the idea that it really is air pressure variances that are causing flight? Is there a chance, however slim, that other forces are at work? How about gravity? What understanding do we have of even this “obvious” factor? What independent testing have we performed to validate theories underpinning our understanding of gravity? Have we performed “negative” tests by considering the absence of gravity, and even if we have, what underlying assumptions are we making when determining appropriate experiments and collating results? Sooner or later, we are going to have to accept the truth of others. In other words, we are going to have to believe.

At some stage, we will all experience a shortfall in self-tested knowledge. At that point in time, we will fall back on the experiences, knowledge and understanding – the “truth” – of others. This isn’t just the case with dynamics surrounding the flight of a paper aeroplane. The reality is that we must make assumptions and rely on other people telling us truths in order to function in any society. Nobody has the time available to stop at every new experience to test validity. You can’t move through life collating a hierarchy of appropriately tested truths. Aside from anything else, our minds just don’t work that way. As children, we must learn how to walk, how to talk, how to eat, how to drink, how to identify safe food or liquids, how to interact with other human beings and a myriad other skills. Some are purely action/reaction and through practice and patience we will gain proficiency. We don’t really need to understand the physics behind walking to know that it is possible, we can just do it. We think that this means we understand walking but the reality is that there are leaps of faith even in the act of walking. Philosophically, we could point to Rene Descartes’ suggestion that we could all be automatons, controlled by a malevolent deity. In other words, we walk because we are forced to walk, and understanding or independent control is nothing but a foolish self-delusion.

Is this thinking around the issues of faith, belief and independently self-tested validity too vague? Is it thinking something out of nothing? Let’s give the benefit of the doubt and ensure we are Still Thinking. That’s one of the beauties of thinking, isn’t it – the lack of a need for purpose for the act of thinking to be a worthwhile endeavour? Back to the issue at hand – trying to identify where belief steps in…

Apple release a new smartphone – the iThink. You don’t need to talk in to this phone. You don’t need to hold it to your ear to listen – nor do you need earplugs or a headset or even Bluetooth connectivity. So long as you have touched this phone at least once, and it has read your eye patterns then you only need think of an action and the iThink will carry out your request.

Marketing material for the iThink claims incredible capabilities. The brochure gives an example – if you want to start a website then you all you need do is to think through the style of site you want, your target audience, and your unique offering. Apple’s massive servers will filter the global database of appropriate formats, establish your iCloud account with an appropriately themed format, and seamlessly link all communications of this website through your existing accounts. It will link your social media with your bank accounts, and will report the operation of your website in both statistical format and via exception reporting for maintenance, monitoring and compliance issues.

Apple shares triple in anticipation of the huge profits to follow from such an empowerment of the average human beings’ individual creativity and innovation.

What if Apple’s marketing tells you that this is not a technological breakthrough – this new device is possible because Apple has discovered a direct link to God. Apple claims it can now prove the existence of God because nobody knows how the damn thing works. What Apple have discovered is not a new technology but a direct phone line to a greater being. One that knows an an awful lot about the world, has seeming unfettered access to the world as we know it, and cares enough about us all individually to offer a one-on-one experience. Apple executives stumbled on the God-link during a spiritual team-building exercise, and the key technology within the iThink only operates because of a dedicated team of thousands of faithful attending prayer workshops 24/7 in Apple deity-data-centres around the world.

What if you really couldn’t work out how the damn thing operates? Are you going to believe or are you going to assume that the Apple executives are pulling a swifty?

This is really a call to author Arthur C Clarke’s “third law”… “any sufficiently advanced technology is indistinguishable from magic“. Is this suggesting that belief is linked to magic? Not really. We are simply asking ourselves where knowledge ends and faith starts.

Do we traverse our pathways through this world, and interpret our understanding of it, through faith? We do if we accept that faith is acceptance of an assumption that has not been validated through personal experience.

There’s a great book out there – What we believe but cannot prove. In it, distinguished scientists and notable dignitaries discuss a belief that they hold, which either has not or possibly can not be validated. In many cases, these are scientific “beliefs”.

So the question needs to be asked – “how does a scientific “belief” differ from a religious belief?” And don’t get all dismissive of this one. If you believe God is a being that truly is beyond our understanding, operating out of principles that defy our current knowledge of physics then how does that differ from a scientific theory that is waiting to be tested?

The easy negations of this thought are:

So, is atheism a lack of FAITH?

We haven’t really made much progress on this one, have we? We still need to consider: 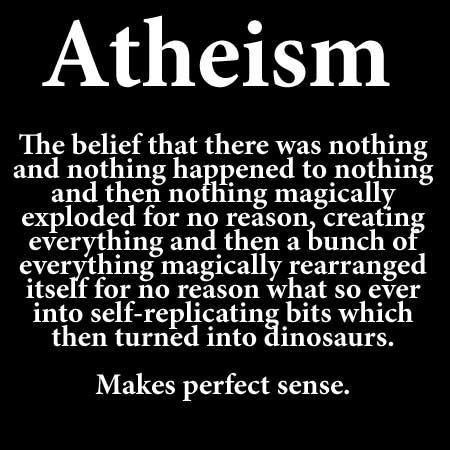 An interesting view of atheism – click on the image for even more interesting discussion it provoked on the website that ran it.

As a by-the-by, i wonder if it is possible to think in heaven? If it is possible, is there a point to it? – as once you get there and you have already been exposed to all-that-there-is, you’d have to expect that you’ve gained a greater understanding of the world… at least, you’d hope so. Once you’ve achieved all of that, is there a point to thinking? Are you going to spend eternity in a “just being” mode?

If you’ve spent your life earning a place in heaven (and hopefully hanging around like minded folk ’cause if you haven’t then it’s going to be kinda lonely up there unless you’re really good at meeting people and making new friends) then will it become a bit of a “been there, done that” event when you eventually get over the initial excitement of encountering the ultimate presence and being proven correct?

So much to ponder, and such a short lifetime in which to do so. ‘Tis why we are Still Thinking. As a by-the-by, one of the principles of the posts on this site is that posts should be predominantly unresearched. That is, they are discussion points and thinking pathways – not answers in themselves. A fun activity is to read a post, and then to research (for most folk, that means “Google”) the topic to identify more academically robust and authoritative commentary. Should you do so, feel free to comment, critique or criticise. You can do so by signing in to this site or by calling by the StillThinking Facebook page (username: iamstillthinking) or tweeting to the @_StillThinking Twitter account. These accounts are updated far more often than this blog, as they contain shorter articles or deal with more transitory, current issues.