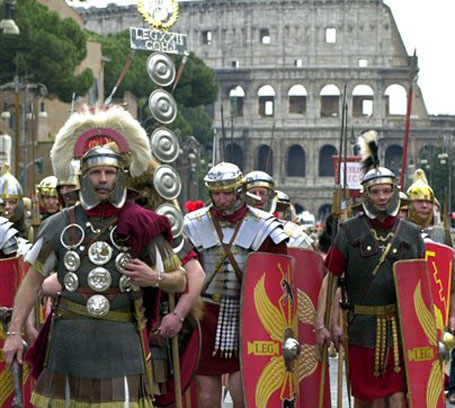 FILE – In this Sunday, April 18, 2003 file photo, people dressed as Roman centurions march in front of Rome’s Colosseum. Rome’s policemen donned togas, capes and sandals in an undercover operation that broke an alleged ring of “gladiators” outside the Colosseum and other landmarks in the Italian capital. The 20 suspects are accused of assaulting and intimidating their competition, in order to be alone in the most sought-after tourist spots at the Colosseum, the Forum or the Vatican. Rome police said Friday, Aug. 12, 2011, that complaints alleging assault were filed against the suspects, who were not under arrest. (AP Photo/Alessandra Tarantino, File)