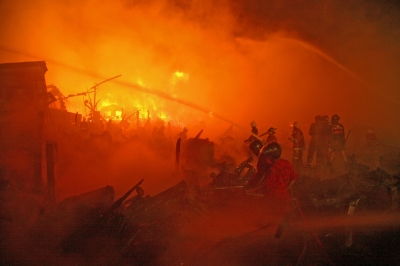 Is there any point arguing while the house is burning down?

The United States political arena is often held up as a shining example of robust, passionate debate about issues that count. A living example of how a country should be and how active involvement ensures that the ‘will of the people’ is enforced.

The more commentary i read on even the most inane political articles, the less i hold this idea to be true. The vast bulk of discussions descend into shouting matches. Where folk aren’t shouting, they’re leaning back in their rocking chairs, using the particular article to babble on about issues only vaguely related to the core points under discussion. They try to steer the debate solely through relevance to their particular soapbox issue, no matter how convoluted and tenuous that relevance is. This is theoretically, still a display of robust debate. The fact that a good deal of it is misinformed or ad hominem or vitriolic seems to be irrelevant. The more heated, the more abusive, misinformed and fallacy ridden, the more that debate is seen to have fulfilled the accepted litmus test for participative debate.

Trawling through commentary has become my favoured past-time. It is sometimes illuminating, as the extreme views help to clarify the more poignant issues and perspectives but more often than not, the bulk is little more than calls to de-elect a President or elect a far superior Republican/Democrat or the rancid calls to authority that this article highlights.

History is a record of lives lived, while the history we are taught is a litany of the larger mistakes or accidents identified as important and subsequently recorded by the 1% who are quite happy to ignore 99% of the living that occurs on this planet (please feel free to interpret this as a call to globalisation or environmental impact inclusion or whatever other soapbox you may sleep on but it’s really just pointing out that the names named in history books don’t add up to a large chunk of the relevant population). Hence calls to authority based on historical figures or events are inevitably doomed to fail any validity test, and will most likely achieve little more than add to the pile of ignorance already surrounding any given issue.

Wouldn’t it be great if politicians focussed on their policies and how they will help the country and where they might hurt within the country, and allow their constituents the opportunity to make informed decisions…? Unfortunately, as this article points out, in a world bloated with infobesity, populated by an ever more frequently updated but significantly less informed populace, such ideals aren’t worthwhile objectives – they’re just boring.

Bring on the sound bite.

← The Lunatics are running The Asylum – Part I
Deep Thought →