The Lunatics are running The Asylum – Part I

by Still Thinking on April 9, 2011 in Phiddling with Filosophy • 1 Comment 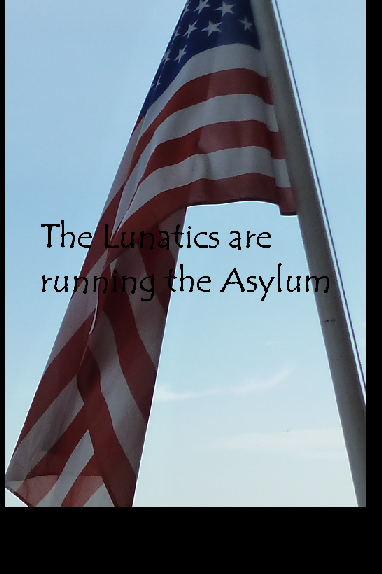 Have you ever been through one of those days where everything is so hectic, so time-constrained, that one event merges into the other until at the end of the day you cannot even remember all that you have done? And then you look down and notice that your skirt was tucked into you panties, exposing your butt cheek to all and sundry? Or your fly is undone, and it has been all the long day?

Sometimes even the most incidental peek from another perspective can reveal a major flaw in our individual view of the world. Weakesses, blemishes, ironies, defects, foibles and contradictions are highlighted in bold. While we see our actions as right, and good, and strong, others may be disinterested in those actions but notice that our manner is abrupt, abrasive, and tyrannical. While we argue vociferously for the values and ideals that compel us to our own version of greatness, others simply hear noise and the strident declarations of bloated self-importance.

And so it seems when looking at the United States of America from the outside. America has become The Asylum, and the lunatics have taken control of the operation.

Those inside The Asylum argue for individual freedoms, when the expression of those freedoms metamorphising into lists of Rights that become hegemonic prison walls for all but the rich, the powerful or the very few with the vision to transcend them.

The right to live where you choose and the right to move freely within the country becomes the foundation for reinforcing the status of social underclasses. It becomes a good thing to set wages at impossibly low levels because arguments against this can then be dismissed as the rantings of Socialists or the whimpish snivelling of a taxpayer supported academia. If you offer that wage and a person takes the job then you are providing employment, expressing entrepreneurship and strengthening the economy and following the Great American Way. If that person takes the job then it shows the wages were acceptable – they weren’t forced to do so. At least, not by you and not by any one person elsewhere. It is the rules set up within the Asylum that allow this to become so.

In an ideal world the concepts behind these rules and laws would be acceptable and could be seen as good. Their implementation would result in greater freedoms, a better diversity of wealth, and the rewarding of those who make the effort to work hard or those with ideas and abilities that can be of benefit to society. Schools of thought such as the Austrian School of Economics and their amalgamation with Libertarian anarchistic philosophical ideas would result in a better outcome for society as a whole. For a brilliantly coherent look at whether it is correct to tag US Libertarian thought as ‘anarchistic’ spend a moment pondering this note by Murray Rothbard on the Mises Institute website. We aren’t going to tackle the issue of categorisation of thought here but it is a worthwhile diversion for those excessively endowed with that incredibly precisious asset – time.

Aside from wages we have the target of much angst in the United States – Health and Welfare. Many would love to see these taxpayer funded measures eliminated. Take this note from George Reisman, again from the Mises Institute website (as an aside, this is definitely not a note against the Mises Institute but more a recognition that the Institute presents the more lucid and knowledgeable those considered Libertarian in their economic thought, and therefore a better resource to consider such attitudes than the louder mainstream or political groupings). The objective is clear – to remove government interference in what should be a free market system that encourages self-contained thinking and effort, such as providing for ones own healthcare and retirement. The economic processes are well enunciated and most likely would work with standard economic modelling. The final paragraphs of this note confirm the importance of the individual and especially the retired and aged but the implementation of the ideas mentioned would result in a period of intensely difficult transition for those involved. Some would have the money to cope and the mental capacity and resources to deal with the transition but many would not. There is some sort of magical, almost mystical faith that something called The Market would rise to the occasion and ensure that those who tried would be able to cope. The Market will magically provide more jobs for the old and elderly. The health system will magically become cheap enough for the average person to afford (with no mention of the poor, unlucky or underprivileged). Dropping the minimum wage will allow these people to be employed, working longer and harder simply to exist – at a time when their capacity reduces each year.

One of the areas covered by this particular note is certainly worthy of deep thought – the guarantees that are proffered versus those that can actually be provided. Pension funding is a global issue, and one that is discussed from a point of ignorance by mainstream press and political spokespersons. The question is whether guarantees can actually be guaranteed?

But we do not live in an ideal world nor do academically rigorous principles get translated perfectly by politically constrained representatives. The impossibility of translating academic perfection to the real world is vividly demonstrated in the ‘climate change’ debate, which rapidly descends into an argument between competing political ideals, distorting the clean implementation of solid scientific data.

For example, if medical and retirement benefits were withdrawn completely, how would the transition be dealt with? The answer is “Badly”. The flaw in the argument is that the ‘invisible hand’ of the free market will provide all that is required if we only had faith. And yet over the past decades, the average wage in the United States has not risen in real terms. The average worker today will encounter a lower level of living than their parents. The disparity between the rich and the poor is greater, the difference between the highest and lowest paid workers has become distorted to the point of obscenity. The United States has evolved to the point of Victorian England, where the household you are born into will have the greatest impact on your life and opportunities. In a land that supposedly values freedom and individual effort, there is an discomfitting level of class structuring. Even if it is based predominantly on money, which should be efficiently allocated by an efficient free market to the people who are ‘most deserving’, the result is an entrenchment of existing hierarchies and eventually this will lead to a class position no different to English aristocracy.

In the Lunatic Asylum the representatives are backed by solid objectives and well-researched policies. They can point to respected authorities from a range of fields as support for their proposed programs and policies. They can recite a blue-blood lineage of authorities as backing for any single declaration. As a final point of debate they can always fall back to various forms of argument fallacy to obfusticate and misdirect opposition. How do issues such as abortion get attached to bills whose purpose is supposedly to provide funding to allow federal agencies to continue to be funded? How do trifling issues that are not statistically material to the overall process are allowed to bring a system to a grinding halt. Is this the correct workings of compromise and political posturing necessary for a free market to operate? You can try to argue that position but the slope is slippery, and the slide down is littered with unexpected outcomes and extremes.

And so it is with economics, money and politics in the United State of America.