Secular Government and Elections in Australia

by Still Thinking on July 29, 2010 in Phiddling with Filosophy • 0 Comments 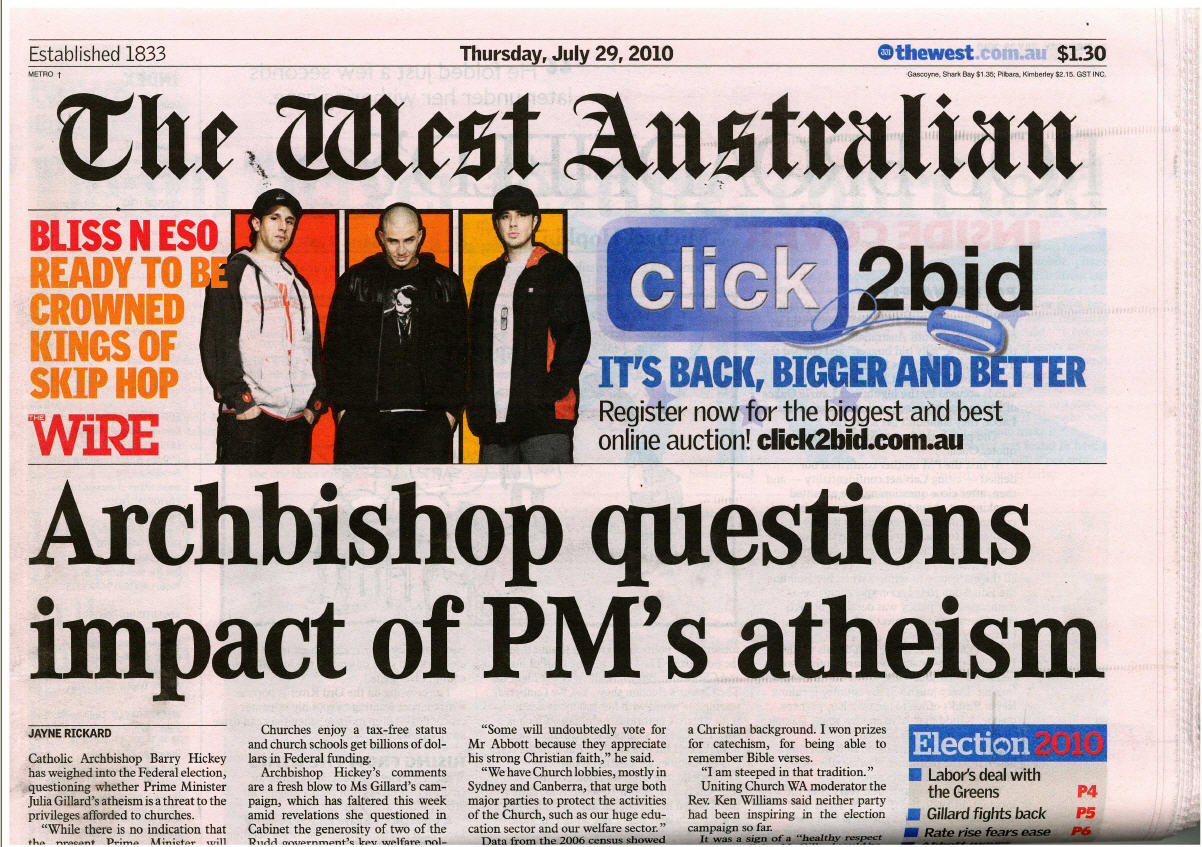 Where are the soldiers of the Fourth Estate when you really need them?

For those unaware of the happenings in the Centre of the Civilised Universe, there is an election campaign currently under way here in Australia. And the specifics of this particular election are generating an awful lot of material for the next 10 years of stand-up comedy sketches. As the saying goes, “one day people will look back on all this and laugh”. You can only hope so. There is so much potential humour on display here…

This particular newspaper (pictured above) is the major paper in Western Australia. It has the greatest reach of any publication, and enjoys pretty close to a monopoly status here. If you spend a few moments pondering that headline news story, what kind of thoughts does it conjure for you? How does this fit in a secular country? Is the Archbishop questionning the validity of a secular country having an atheist prime minister?

It is pretty clear that religion is being raised as an issue in this election. On the one had, the encumbent prime minister is a female. She is also an atheist, and is in a happy relationship in a state of unweddedness. Lined up as a challenger to rule this little country is a married, male who happens to be Catholic. In an ideal world, in a secular country, none of this would be very relevant to who receives those little ticks or crosses on ballot cards. But we are not in an ideal world, and it is reasonable to question just how secular this country is.

Let’s put all cards on the table here… As an apathetic armchair anarchist the validity of either contender to be a fit person to steer the ship of power is dubious. Recent political events in Australia have highlighted the misunderstanding that exists on how representational government operates. Many are questioning how it can be that an individual is voted into the role of prime minister only to find that person sacked from the job by the political party they supposedly led? Who really controls the power at the end of an election?

And into this mix of power/ego/control/media manipulation and porkbarrelling we are now going to throw a very unhealthy dose of religious positioning.

The article’s author is at least prepared to submit the opinions of other church sect leaders to provide at least a semblence of balance – but where is the questioning of the Archbishop’s public positioning statement?

One of the problems that Australia currently faces is it’s apparent escape from the worst aspects of the Global Financial Crisis. The ensuing veneer of immunity from global issues has resulted in more emphasis on side issues, like “boat people” (for the uninitiated, this is refugee policy) and religion.  And so we are likely to continue to see the worst examples of Tokenism, Sound-bite-marketing and disregard for the major issues of responsible government. Anyone feel the need for a shower?

← My life as a Nephrasian Hermalakka
Billionaires and Philanthropy, Death and Taxes →