Do Libertarians really understand their position?

by Still Thinking on March 9, 2010 in Phiddling with Filosophy • 1 Comment 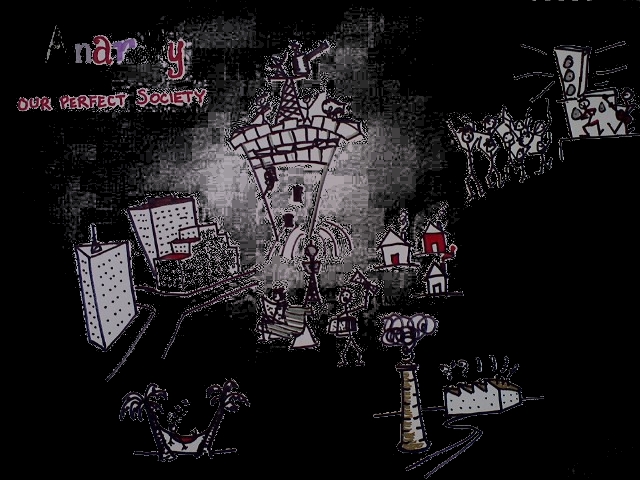 Anarchy at what cost?

Anarchy in the United State of America is most often found in the form of “Libertarianism”. That word may not actually exist but the fact that i have written it provides a historical basis for fact and a precedent that can be used as a (rather insipid) excuse for building  a bigger statement of fact… Stay with me, i am getting somewhere here…

Ignoring the fact that i have only my limited range of reading as a backdrop for making this statement, let’s assume for a moment that “American” anarchistic thought is most often expressed in terms of the almost “frontier thinking” attitudes of libertarianism. Regular readers will be familiar with my fundamental dislike of “isms”, as they tend to be fall-back positioning statements of academics attempting to interpolate a large chunk of folk into a narrowly delineating category. However, i am going to retreat to the fool’s comfort of a bracketing statement and group a large number of basically anarchistic thinkers into the category of “libertarians” (not quite an “ism” but it is if we move away from the individuals and into the realm of the attitudes those individuals express).

Do i have a point here? Who knows? Enough social lubricant and i’ll express a range of opinions so big that you’ll wonder just what group of people are hiding out there in the recesses of my tiny little preoccupied mind.

The point of it all is the issue of healthcare in the United States. As a provocateur of anything financial, it behoves me to register for all and sundry newsletters, updates, blogs, commentary and expert opinion on just about anything financial – and here’s the thing… A number of US pamphleteers (i’m taking licence here, as some of these characters are so blatantly materialistically self-serving that the term pamphleteer could be considered more than reasonably charitable) are making particularly broad statements about the potential impact of changes to the USA’s basic healthcare system… A few nights ago, i happened to sit on the sofa long enough to encounter a commercial tv programme – it was a US “news” host discussing various topical issues in an intelligent and cynical way. The fellow started to go on about the healthcare system changes being proposed by Obama Bin Laden or Tony Abbott-Rudd-En or whoever is the current popularly elected head of state of the (marginally) United States. Anyway, the gist of it was that the country was about to go bankrupt owing to the extra costs incurred in providing healthcare services to people who currently don’t qualify for any health care facilities by virtue of being financially inadequate in one way or another. It occured to me (all the while pondering whether “occured” should actually possess two “r’s”…) that whatever the potential outcomes for the country itself, surely something was being missed in the discussion taking place. Again, i am being charitable in terming a one-way tirade a “discussion”. What is really being said here? It is no secret to those actively participating in the debate but really the question NOT being debated is whether one of the richest countries in the world is wealthy enough to provide for a basic level of healthcare service to each and every human being living in its borders? (if i have missed some very clever double-triple cleverness of Conan O’Brien’s in covering the healthcare debate then i apologise unreservedly – i can’t say that i was sure he was entirely intentional in his polemic – but my impression was that he was in the group that thought universal healthcare would send the country’s finances into the toilet).

The United States has one of the best healthcare systems in the world – possibly the universe, if you hold with the “we’re all alone” theory. The only problem is, you have to be stinking bloody rich to be able to access the expertise that the world-beating level – or a member of some employer/you-beaut-subsidised group system. What if you step back a moment and ponder the bigger picture of a society delivering a standard of living to its members? It seems the USA has a particularly inefficient system in place. It is expensive and delivers less of the greater good than lots of other nations.

So what is the big deal? It seems that there is a very strong “anti-slacker” movement in the US of A. In other words, there is a substantial chunk of the population that believes that Government is bad (nothing wrong with that – very traditional anarchistic thought processes in action)  and that it should be up to the individual to look after their own needs. This is an admirable objective. It is a logical objective of a country with a smaller Government component of GDP than countries that it would normally compare itself with. Again, all good stuff. It means that less of society’s surplus cash is being diverted to inefficient, inappropriate and out-of-control Government departments. Another way of looking at it is to suggest that the United States has a greater proportion of wealth being directed in the most efficient manner (if we assume the mantle of classical economists and assume that the privatge sector will allocate resources more efficiently than a centralised beaurocracy will). The Economist professes a desire to seek “small government” answers to society problems but states a problem with the USA’s healthcare costs moving from around 9% of GDP now to 20% in 15 years time. Truly, a cynic would have to yawn and grumble “big fucking deal”. How about aiming for a more rational objective… something like trying to bring the out-of-control costs of the USA’s health system into line with countries that deliver better outcomes to their citizens for every dollar spent? Government expenditure in the US as a % of GDP is lower than many European countries (in Euro countries where expenditure is close to 52% of GDP and even Australia with all of its budget surpluses still remains at 37% of GDP) but at 35% in 2010, not much different from Austrlia’s. The difference is that Australia provides a basic level of health care (Medicare) to all Australians for a cost of ~9.1% of GDP. For it’s 9%, the US of A still manages to fail to cover 15% of its population – ie, more than the entire population of Australia.

For horrible statistics, have a look at Wikipedia’s listing of the areas in which America’s expensive health system fails to deliver positive outcomes for its population.

Back to my pondering of the Armchair Anarchist thought process going on here… The whole point of anarchistic thought is that the individual should be free of government interference and obligation, as the State is at best passively uncaring and, at worst, violently destructive. So where does universal healthcare by the state come into this thought process? The bulk of infrastructure in anarchistic thought is predicated on the ponderings of very intelligent and caring folk who existed in times long gone, in societies where the minimum level of state care was oppressive disinterest. What would they have thought of a system of universal healthcare, with costs being met as a part of the basic cost of belonging to a society? Most likely, they would have railed against the beaurocracy while all the while being appreciative of the level of care the State provided to the Great Unwashed.

Again, back to the point of libertarianism. This particular branch of anarchy assumes that you are self-sufficient, self-medicating and self-driven. A whole heap of self mantra’s that a large percentage of the population just are not capable of. So when do you cease to be a libertarian and start to be a member of the ruling class – dominating the Great Unwashed for the sake of a small percentage tithe on your hard-earned income?

The more i hear these arguments, the less inclined i am to follow the extremities of anarchistic thought. More people should be thinking of the state of play of more of the people… I think a death tax would achieve this.. but i’ll dribble on about this another 60 seconds…

← And on the 7th day, Man created God
Remembering Ozymandias →