Once upon a time, a budding world dictator such as myself would have required a solid dose of soldierly ability, and a rather violent disposition in order to achieve world domination. Actually, you pretty much needed those capabilities just to take over the neighbour’s farm.

Today such violence is passe´. If you want to take over a country, a community or a culture you just need money. Lots of it, admittedly but money will suffice.

And so it is that we peer into the current trend of rich countries buying farmland from poor countries, simply so that they have control of the source of supply – and hence don’t have to negotiate fair prices with the ‘poor’ country.

This is not just ideological ranting. This is comment on actions taking place right now. I’ll add further to this post shortly – this is simply my reminder that such an important issue should not be forgotten amongst the day-to-day trivialities of meeting your host society’s expectations for participation.

Let’s start by considering this extract from Spiegel Online’s article, “Searching for Water under the Sands of Saudi Arabia”. 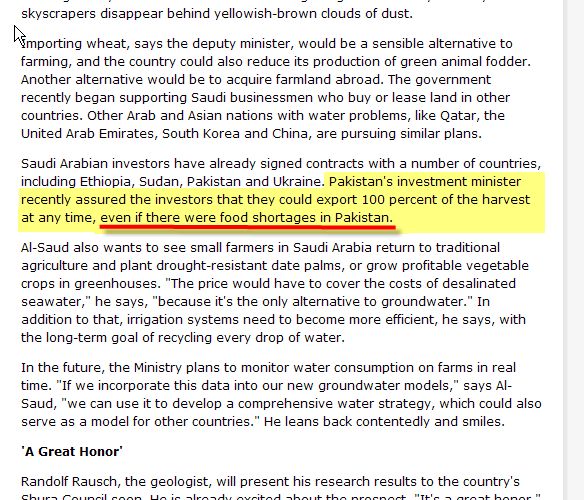 Can you believe this statement?

What is it that seems so wrong about this statement? How about a government minister actually suggesting that he would allow people to starve in his own country, even if there was sufficient food being produced there?

Here are a few projections of global populations for the future. The facts as they stand support the concept of increased competition for available food and food production factors. 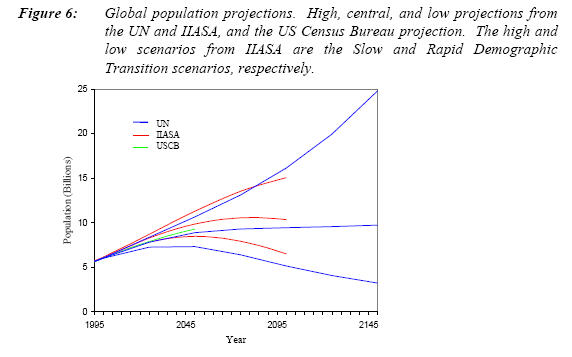 Lots and lots of people

From a global perspective, those countries with arable land should be able to command premium prices for their produce in the years to come. And so the profit motive enters the equation. Now we are talking about money making money. Why pay £10,000 per hectare in the UK when you can pay $1,520 in Australia? Farmland prices around the developed world have increased at historically high rates – even allowing for the impact of the Global Financial Crisis and reduced capital availability. Why pay these prices when you can pay $350 to $500 per hectare in Zambia? Or obtain 99 year leases in other African countries?

There are arguments that the capital flowing into poorer countries will help them alleviate poverty and increase opportunities for their workforce. The new money could help establish and improve basic infrastructure, such as water access, roads and processing plants. There is some validity in these arguments but do they address the issue of ‘fair compensation’? Most likely not. They certainly do not take note of the massive future income streams being sold for a pittance when farmland is exchanged on current valuations or net present value calculations. The reason that this process fails to deliver fair results is that it reduces the future value of an income stream at a higher rate the further out it is. For example, this same logic kept the valuations applied to the massive, decades long development potential of the Olympic Dam mining site at such a low level that the owner, Western Mining Corporation, was eventually bought out by BHP. Our human minds have trouble ascribing a fair value to something that has potential to pay out for lifetimes rather than years.

Tackling this issue is difficult. Forcing local content ownership often leads to money being channelled into the hands of powerful, wealthy or corrupt officials and therefore providing little benefit to the general population.

Some of these points are raised in this article. It is worth going through, as it covers the issue in good detail – from an African perspective.