What role of mainstream media in society? How do we as individuals allow the Fourth Estate to impact our thinking? (Image : Cox & Forkum -click for link)

The latest post attempted to provide a framework for assessing the role of mainstream media in setting the world-view of the individual. It also provided a vague example by looking at the standard reporting of events relating to the unravelling European “Debt Crisis”. However, the world we inhabit is not the full-stop at the end of history’s sentence. Hence within 24 hours we are provided with an example of how mainstream media falls short of the role for which its proponents argue.

On the 28th November, Australian folk woke to a rapidly rising sharemarket and the “news” that the International Monetary Fund (IMF) was going to give Italy a loan of 600 billion euros at well below market interest rates. This would ensure that Italy did not need to approach those rascally bond markets and ask professional investors to lend them money.

Sharemarkets were enthused that such a big move would finally help reduce the fear of European banking falling into a deep, dark hole. Bank shares rose, and mining shares lifted (presumably on the assumption that Europe would avoid a recession and that would help China avoid some awfully physical thing referred to as a “hard landing”.

The “news” was dutifully repeated ad-nauseam across the world’s major news networks. Bloomberg, the Wall Street Journal, New York Times. Google can always be relied upon to quickly gather the extent of a particular issue… 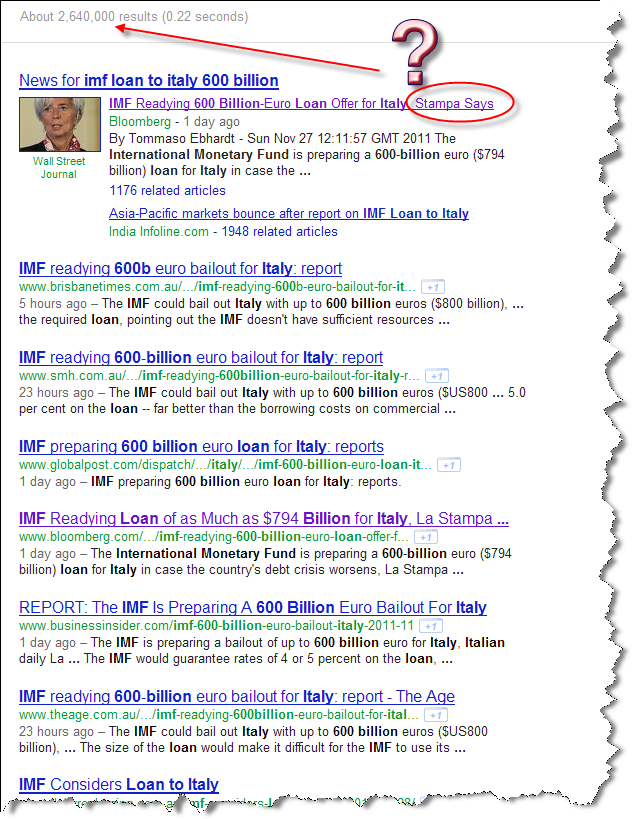 Is it news when a rumour is simply circulated as if it were fact?

Why is this important?

To start with, any financial news outlet worth its salt would have very quickly realised that this particular item had very little possibility of being true.

There are many, many reasons for this but the most laughable is that the IMF is funded by its shareholder nations – which means that the EU would have had to stump up around a quarter of this money, and the United States would have been up for around $150 billion (+/- a fraction of a trillion or so… money becomes such a drag when you have to deal with all those zero’s). What thinking person would look at the financial debacle that is the United States, and happily accept that the powers that cannot agree on the country meeting its own debts, would simply dip into their pockets for one hundred and fifty big’uns to give Italy a free ride for the next 12 months or so?

Your correspondent had a great time yesterday morning, looking for source notes on such articles, and finding that the roundabout led to an Italian news outlet, La Stampa. Amazingly, few of the larger news outlets even hinted that the possibility of the article being a mere rumour. There were a few organisations that managed to clarify the issue but the point is that many did not.

And so we return to the need for the individual to ponder just how they receive their “news” and which filters (if any) are going to be used to separate the useful and valuable information from the simple transmission of rumour, innuendo and fluff.

Money is power, and hegemonic power fields are being fought over as capitalism and democracy vie for supremacy. So far, capitalism is winning. If that isn’t news then what is?

Italy and Greece are now governed by bank-appointed receivers. Mainstream media has yet to catch on to this. In financial markets, most commentators made a note of the loss of democracy then moved on to the day’s business. They see it as a logical progression, and no big deal.

In the United States, losses from the Global Financial Crisis that should have been booked to those taking the risks were instead reimbursed in full by taxpayers, who found their representatives borrowing a smooth trillion or so from global markets to meet those losses. The powers that be then approved making huge commission payments to those exact same businesses that had just been bailed out, as yet more money was force-fed into the banking system. In the United States, unemployment is seen as being fixable by simply sending more and more money into the banking system. Mainstream news has been quite up-to-date on this one, so a small ‘yay!’ for the team.

If anyone has a doubt about the power of mainstream media, and its capacity to distort and deceive, how about working your way through this little article, which points to the Communist Party vision of mainstream media’s role in China. Here’s are two quotes taken from the article, in which a representative of SARFT (State Administration of Radio, Film and Television) puts the party line view of mainstream media…

“They bear important responsibilities in the public cultural service system, they must fully play up their advantages and earnestly perform their duties”…

The point was that the Party decided to cancel advertisements during some programs, to ensure viewers were being correctly programmed (my interpretation but read it and see if yours differs).

If that doesn’t make an individual pause and reconsider just how much they allow such tripe to influence their world-view then lets fall back on the comforting pillow that is despair, and pull out a copy of The Road, just to assure ourselves that things could actually be worse.